The library was awarded several grants in 2020 and continued to engage in community partnership and outreach.

The James B. Duke Memorial Library at Johnson C. Smith University was awarded a $50,000 grant from Institute of Museum and Library Services Museum Grants for African American History and Culture. The grant supported a public art program, RCLM 37 that uses Art, sound, and visuals to chronicle the past and present day narratives of historic African American spaces in Biddleville and the Beatties Ford Road Corridor in Charlotte, North Carolina—home to JSCU.

The RCLM 37 project team plans to create four interactive, outdoor mobile “pop-up units” incorporating original soundtracks using oral histories to capture the past and present sounds of Biddleville by infusing gospel, jazz, hip-hop, and other pieces to appeal to a multi-generational audience. The RCLM 37 project activities will also include tours and a discussion series to share the history of Biddleville and to generate dialogues about urban renewal. Materials collected for this project will become part of the JCSU Digital Smith Archives.

Monika Rhue, Director of Library Services and Curation is the Project Director. Janelle Dunlap serve as the Creative Director. Ms. Dunlap is a social practice artist, curator and consultant who works to generate intentional and transformational change through her practice.

Mrs. Rhue hopes upon completion of the RCLM 37 project that it will serves as a replicable model for other communities impacted by urban renewal and gentrification.

The James B. Duke Memorial Library at Johnson C. Smith University was awarded a $35,000 grant from the National Park Service and Historic Preservation Fund: Civil Rights Grant Program. The grant will support A Virtual Sense of Place: Critical Black Urbanism, to document alteration in housing and land use for African Americans beginning with the period of the modern Civil Rights Movement in Charlotte, North Carolina. The project activities include digitizing maps and manuscript holdings regarding traditional African American Villages in Mecklenburg County, North Carolina.  The focus is on  neighborhoods that existed before the first wave of gentrification by the City of Charlotte in 1959-1970, and which are housed under the title “The Brooklyn Collection” at the Inez Moore Parker Archives at Johnson C. Smith University.

The project objective is to share documents relating to the Brooklyn, Irvin Park, Greenville, Biddleville, and other African American neighborhoods that existed before the first wave of gentrification by the City of Charlotte. In Charlotte, Mecklenburg County, N.C.,  as elsewhere, the federal government funded local urban renewal plans to gather land settled by African Americans, using eminent domain enforcements and city code violations to eject African American communities, and to place those families in public housing. This phenomena marks the continual struggle in American politics over interpretations of Civil Rights, between ethnic groups, within cities, and between citizens and their national government. Grant funding will allow for preparation of maps, photos, and correspondence about renewal and relocation. This is part one (1); of a longer-term virtual project in which altered or destroyed African American neighborhoods are recreated in an augmented reality application (app) and experiential exhibits with immersive elements. Project staff: PI: Historian Dr. Tekla Ali Johnson, Co-PI: Library Director Monika Rhue, Co-PI:  JCSU Archivist Brandon Lunsford. 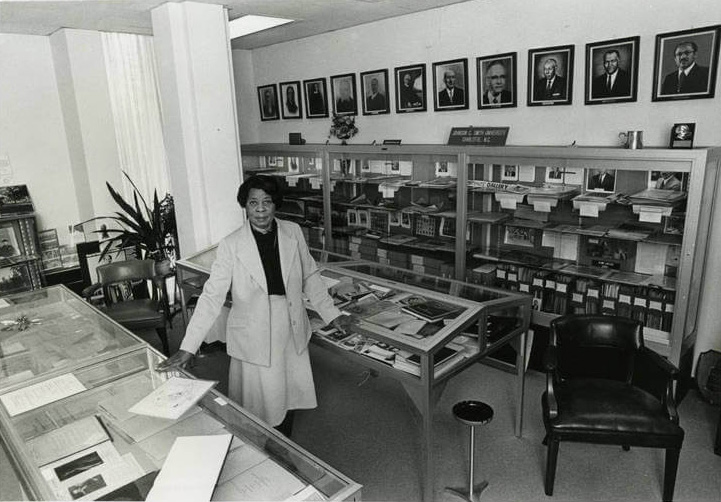 The James B. Duke Memorial Library at Johnson C. Smith University was awarded $ 249,843.00 from the Institute of Museum and Library Services (IMLS) Laura Bush 21st Century Librarian Program to support the Diversity Archivist Partnership (DAP) project. The funding will allow Johnson C. Smith University (JCSU) to develop and execute a training and internship program that introduces undergraduate students from Historically Black Colleges and Universities to a wide range of careers and opportunities within the fields of Library Science, Archives, and Cultural Preservation. This three-year program will develop and use online instruction and hands-on experiences curated by qualified practitioners to expose undergraduates to the library and archives professions and consequently work to address the field’s diversity gap. Students will learn the basics of archival and preservation practices and gain leadership skills through digital courses, internships, and two Summer Institutes.

It is only befitting that Historically Black Colleges and Universities have an active role in diversifying the libraries and archives profession.  This project represents a unique chance to expose African American undergraduate students to a wide berth of careers and themes within libraries and archives, while boldly increasing diversity said Monika Rhue, Project Director and Director of Library Services and Curation.

The success of this award is a team effort. Dr. Tekla Johnson and Brandon Lunsford are contributing authors to the DAP proposal and they will serve as the Co-PIs and Project Coordinators for JCSU. Dr. Johnson serves as a librarian working on diverse projects for the library, including electronic resources, open education resources, and archives projects. Previously, Dr. Johnson has served as the Director History Program Co-Coordinator of new Africana Studies Minor at Harris-Stowe State University, St. Louis Missouri. Brandon Lunsford is the University Archivist and Digital Manager, and his experiences have included creating a digital interactive map of the historic African American neighborhoods surrounding Johnson C. Smith University funded by the National Endowment for the Humanities.

Engage HER: The JBDM Library partnered with the Charlotte Mecklenburg Library to develop programming around the Engage HER theme. This was a grant funded partnership. The theme supports experiences of black women in the Women’s Suffrage Movement, Centennial of the 19th Amendment, voting rights, the increasing participation of women (especially women of color) in public and civic leadership, and the emergence of contemporary social movements. The project also highlighted, more broadly, women’s rights, voting rights, and civic activism between the 1850s and the 1960s and the impact on civic engagement today.  This project was made possible by funding from Pivotal Venture.

Village HeartBeat Preservation Project: This preservation project seeks to collect and organized the history of community engagement among African Americans in combating health related issues. The project will focus on documenting the history of Village heartbeat programs in Charlotte, North Carolina. Key highlights of the project will focus on the work of Mrs. Cheryl Emanuel and Therease Elder. The final outcome for the project is to have a digital archives and exhibit that will be housed at Johnson C. Smith University.